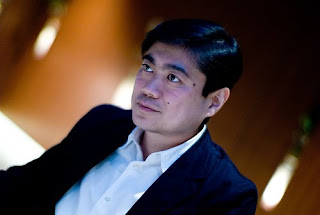 It was great listening to Joi Ito, who had refined his Creative Commons presentation further since SIME. For those of you who haven't looked around too much at the Internet for the past few years, Creative Commons is an NGO that provides licenses that gives copyright owners the possibility to easily share their works in the way they want. A very famous and recent example is the Barack Obama campaign who continuously shared CC-licensed photographs on Flickr during and after the campaign.

Of course I share a lot of my own material using Creative Commons, and I'm also using it for both this and my other Swedish blog both for building and posting to the blog. Sharing digital content in a creative manner is becoming hugely important. I am becoming more and more concerned over the fact that quite a few legislators in Sweden seem to be out of sync with how technology is changing the world.
Posted by Per Mosseby at 12:59 2 comments: 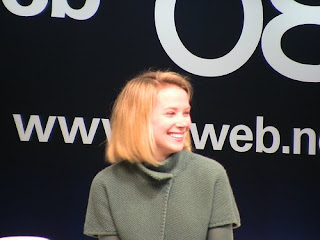 It is always interesting to listen to Marissa Mayer. She's employee no. 1 at Google, and still deeply involved in both Google's core search interface as well as new products.

When it comes to the future of Google's products, Marissa explains that there is a lot of interesting stuff in the long-term pipeline.

"We're thinking: 'What if we made it easier to search from your phone? Or from your car? Using voice?' You can imagine a search interface where you can search on concepts rather than keywords, and doing that using your voice."

It could take a while, though: "I think we'll see great advances in these areas over the next 5-10 years." Michael Arrington at Techcrunch followed up and asked if Google isn't having some kind of super-cool, secret, advanced search interface that they are keeping to themselves and from the rest of the world? Marissa dodged that question, alright :)

The most interesting question from the audicene was one about how she had managed to hire so many talented people, and Google had been able to scale so fast. Marissa said that they early on had a discussion in top management together with recruitment consultants, deciding upon the two most important characteristics Google should be looking for in candidates: People who are smart, and who are getting things done.

Photo by Tiziano.
Posted by Per Mosseby at 12:38 No comments:

I am in Paris for the LeWeb08 conference, and hopefully I'll manage to write a few lines about my reflections from the sessions tomorrow. Right now I'll only comment on a wonderful and pretty neat restaurant we went to tonight: Le Relais de l’Entrecôte.

They do not take reservations, which means that we (and everyone else arriving 9-ish) had to stand in line for half an hour, and they only serve one single meal: Entrecôte with french fries and their super-secret sauce. Vegetarians should go somewhere else. At least you could choose between soft drinks, beer or wine with that. It was wonderful.

After that, some drinks at Ladurée wrapped up a perfect evening. Looking forward to the conference tomworrow when Joi and Marissa will speak.
Posted by Per Mosseby at 01:19 No comments:

My Swedish blog as Mayor of Vaxholm 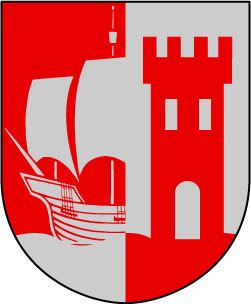 I fired up a new blog (in Swedish) a couple of weeks ago at www.mosseby.com.

I'll use that blog with the ambition of having an intimate online relationship with the citizens of Vaxholm. During my years as a politician, I have heard one above all from the people in Vaxholm: "We don't know what's going on!" I want to change that.

I also acknowledge that times really have changed. People can't/won't/don't want to acquire information in the same way as yesterday. People seldom want to spend a few hours after work on workdays to listen to/discuss local politics - unless it is something that affect them immediately and significantly.

Yesterday's model with general meetings, covering a broad variety of different stuff, is simply not the format. If a certain road/school/arena/building is in a process of change, people want to be able to find specific information about what the change is about, what the likely outcome is and what considerations that has been taken. They do not want to try and parse through a number of protocols, which in the end doesn't state anything more than the actual decisions, anyway.

People also want to affect the processes for change win input in a direct, and often open and transparent way. Through forums, e-mails and IM to their politicians and officials. And the politicians and officials need to have a workflow that give them the opportunity to use such input in a contributing, positive and creative manner. Not to be seen and felt as a burden, as it seems many looks upon such input today.

So that's going to be part of my mission as Mayor of Vaxholm. And I'm starting with www.mosseby.com.
Posted by Per Mosseby at 16:05 No comments:

Kevin Kelly: Predicting the next 5,000 days of the web

This is an absolute must-see for anyone interested in the future of the the Internet and the world from an information technology perspective. Or... you'll understand that it is about so much more than that. We're talking about The One ;)

Kevin Kelly is the founder of Wired Magazine.

I have just recently found all kinds of stunningly insane and pretty cool short films by Marstrand's Boyz. This parody of GTA IV is one of the more insane they seem to have made, even though Zombies The Movie comes pretty close, too :)