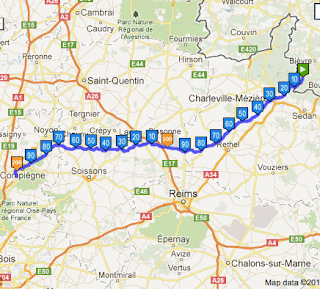 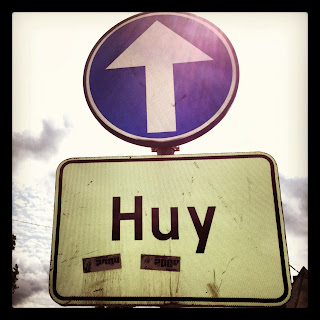 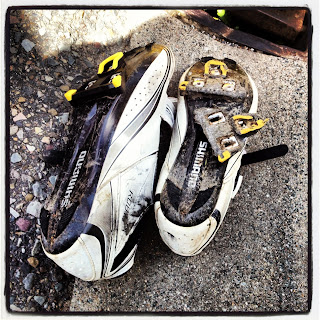 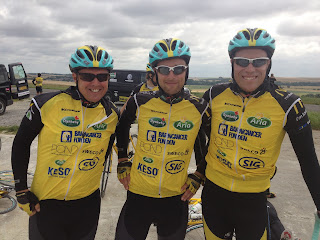 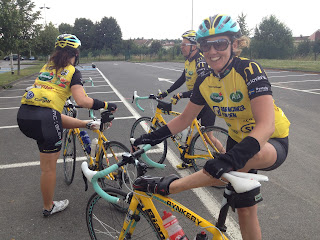 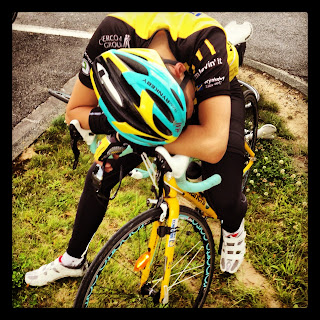 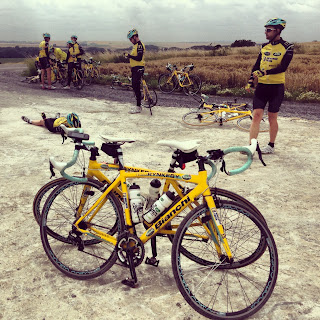 Ok, so yesterday was tough. We started with a climb up and down some insanely steep streets in Liège (or some nearby village; I don't know, the memories are pretty vague).

Every moment took a bit longer than we had planned, which was kind of stressful. Just before lunch we reached Huy and it's famous "Mur de Huy" which is one of the most well-known slopes in the biking world. Sadly for me, my right shoe clip (fixing the shoe to the  pedal) had broken the day before, and the left one gave in just a couple of hours before the Mur. I didn't even give the slope a try without any clips, but a couple of handfuls of the team managed to ride all the way up the Mur without stopping.

The day ended really late, and we reached our weird hotel in Laforet, Belgium at perhaps 22:00 at night. The hotel was run by some kind of French version of The Addams Family. All of this can be a bit stressful when you know you HAVE to eat, shower, eat, participate in debrief/brief, eat, clean your clothes, drink Resorb, eat, go to the bathroom, eat, call home, eat, write something for this blog, eat and go to bed to get a few hours of sleep before you have to wake up at 06:00 and do the morning routine: eat, get dressed, eat, drink Resorb, eat, apply sunscreen, eat, pump the tires, eat, pack all clothes and stuff for the day, eat, carry down the luggage and get out to your bike. Did i mention the eating part?

So - I cut down on the blogging part yesterday to catch at least 6 hours of restless sleep.

Today, Thursday, turned out to be really good considering the challenging distance, steep hills for at least a third of the road, and the fact that most of us has felt pretty exhausted for quite some time now. We rode 207 kilometers in less than 10 hours including a few shorter breaks for some small stuff like munching bars and going to the "bathroom". I was almost stunned with surprise how we had been able to ride so fast as a team, and making so few mistakes. No accidents at all.

I've also been on the "draglag" of our peloton for the past three days. As you might suspect, this has nothing to do with drag shows, drag queens or anything like that. Instead it's a few people in the front of the peloton who takes turn up front to break the wind. I think this is called "paceline" in English, but I'm not sure.

For me, this has been a fantastic opportunity to learn more Finnish, since half of the draglag is Finnish. Memorable phrases include "Jaksaa, jaksaa!" (Work it, work it!) and "Hyvä Fiilis" (Feeling good). It has also been a great gift to realize that it is very much possible to go on exercising for days even though you have lactic acid basically dripping down your legs.

See you tomorrow for the last day of our entourage, our ride into central Paris and the Eiffel Tower together with the other 16 teams.
Posted by Per Mosseby at 02:01